Simon Orchard Garden Design
The homeowners had had a full-width kitchen extension built and, while building work was underway, the garden “had got a bit trashed. It was pretty unloved and unused,” designer Simon Orchard says.

“They also had a sizeable drop from the bifold doors to the garden level and no steps down – they were having to jump,” he adds.

Simon was brought in to create a family space outdoors, a connection between the house and garden, a couple of different seating spots, and areas where the children could play.

Dealing with light – too much of it – was also part of the brief. The garden is south-facing and the kitchen, which had rooflights fitted as part of the build, could get really hot. The homeowners were keen to have a structure close to the house that would provide some shade both inside and out.

Simon Orchard Garden Design
Simon’s solution was to build this contemporary slatted pergola. “It did the job of creating some shade in the kitchen and in the new seating area outside the bifold doors,” Simon says.

Depending on the time of day, the slats provide partial shade, “as well as nice shadow play. The pergola also frames the deck to create an ‘outdoor room’ feel,” he adds.

The pergola is constructed from treated timber painted anthracite grey to go with the bifolds. The deck is a greyish-coloured composite.

“It’s much longer-lasting than treated timber and it won’t rot,” Simon explains. “Also, since it’s not a natural product, you don’t get algae growing on it, which can cause it to discolour and become slippery. We chose the shade as it’s a contemporary colour that goes well with the new kitchen.”

Simon Orchard Garden Design
After the builders had gone, the family were left with a long drop between the kitchen and garden.

Find a landscape architect or garden designer to help you realise your dream outside space.

Simon Orchard Garden Design
To link the spaces, Simon created these chunky diagonal steps, with a 20cm shadow gap between each level to give the illusion they’re floating.

“I wanted to make a nice, gentle transition from top to bottom, especially as the owners have young children,” Simon says. “I also wanted to do something a bit different. The steps are designed to lead you down and then diagonally across the garden.”

Simon Orchard Garden Design
At the bottom of the raised deck is a border featuring, among other plants, Achillea ‘Credo’, Geum ‘Totally Tangerine’, Penstemon ‘Raven’ and Salvia nemorosa ‘Caradonna’.

Simon Orchard Garden Design
“I use the colour wheel quite a lot for planting,” Simon says. “Opposites on the colour wheel – yellows and blues/purples, for example – can make a nice scheme. Picking three colours next to each other on the wheel can also make a nice combination.”

Simon Orchard Garden Design
Borders run down both fences. “As a design feature, I never have a lawn butting up to a fence,” Simon says. “Otherwise, you wouldn’t be able to grow anything up the fence and it could look a bit stark.

“There are climbers all the way down and lots of tension wires. Since the photos were taken, it will all have grown to the point where you probably won’t see much of the fence at all,” he adds.

Having borders also makes it easier to cut the grass. “You can’t mow that close to the fence, so you’d be going along after you’d mowed with your shears. A pain!” Simon says. He edged the lawn with steel to allow mowing right up to the beds and to give the grass a crisp edge.
Before Photo

Simon Orchard Garden Design
Simon planted right by the edges of the steps to soften the lines. Here you can see herbs, including sage, purple sage and oregano.

Simon Orchard Garden Design
The garden contains a considerable amount of fencing and it was important this was in keeping with the rest of the design. “Horizontal slats give it a more contemporary look than a traditional closeboard feather-edge fence,” Simon says.

“It’s western red cedar – a softwood, but one that has natural properties, meaning you don’t need to give it additional sealing,” he adds. “In time, the cedar will go a nice silver colour, which will match the decking more closely.”

Which type of garden fence should I choose?

Simon Orchard Garden Design
The circular planter on the deck was already there, but Simon painted it. It houses an Agapanthus top-dressed with chipped limestone in a pale grey. It’s another contemporary detail and another link to the other end of the garden, as the same stones are used in a small area at the end of the lawn.

He created a second seating area at this end of the garden, allowing the homeowners to enjoy a different viewpoint as the sun tracks around the space. It’s also used as a play area for the children, the flat surface being perfect for a slide and trampoline.

Simon Orchard Garden Design
The flowers at the edge of the paved area are Hydrangea ‘Little Lime’ interspersed with Geranium ‘Rozanne’. “In time, that will grow to form almost a short hedge, zoning the area further,” Simon says.
Before Photo

Simon Orchard Garden Design
Here you can see what an uninviting, unloved space the garden had become after the kitchen extension was completed.
Before Photo

Simon Orchard Garden Design
Tell us…
Which ideas from this modern garden would you take for your own outdoor space? Share your thoughts in the Comments section.
Comment21 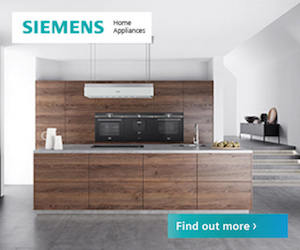 What business housekeeping jobs are you doing to stay productive?
7

How to Link Your Indoor and Outdoor Spaces Full Story

14 Beautiful Gardens That Don’t Have a Lawn Full Story

How to Cut the Cost of Your Extension Project Full Story

How to Create a Timeless Blue and White Scheme Full Story

Cassandrascott24, I used to dry a lot of the wash outside, but then moved to Colorado where my allergies went ballistic! So hanging the wash outside is most definitely not always better. That being said, I hang as much as I can inside the house to dry.

Love it, every bit of it!

What a great improvement, awesome fun yard and gorgeous deck!

Most Popular 30 Inspiring Ideas for Your Garden Path
By Amanda Pollard
Stepping stones, gravel, herringbone brick... There are lots of pathway options. Let these schemes spark some ideas
Full Story 18

Most Popular How to Link Your Indoor and Outdoor Spaces
By Julie Butterworth
From framing the view to uniting the flooring, there are lots of ways to help your house and garden connect beautifully
Full Story 12

Photo Inspiration 14 Beautiful Gardens That Don’t Have a Lawn
By Amanda Pollard
Need some inspiration for a lawn-free garden? Take a wander around these gorgeous outdoor spaces
Full Story 41

Most Popular Houzz Tour: A Rundown Victorian House is Completely Transformed
By Amanda Pollard
A side-return extension and redesign have turned a dark Victorian property into a bright, comfortable home
Full Story 51

Most Popular Houzz Tour: A Clever Angled Extension Opens Up a 1980s House
By Sarah Alcroft
An ingenious solution took this L-shaped property from gloomy and awkward to light, open and sociable
Full Story 21

Colour How to Create a Timeless Blue and White Scheme
By Laura Wheat
For a fresh, calm look in your home, go for this effortlessly stylish colour combination
Full Story 7